-
In The Field, South Caucasus Parks
-
Posted by CNF Staff

It’s like a lost city of Atlantis, though instead of being hidden under water, it is enveloped in thick forest, teetering above steep limestone cliffs. A narrow road, enclosed on both sides by high stone walls, takes you towards the heart of Samshvilde – in medieval times a thriving city, royal citadel and the center of a chain of stone 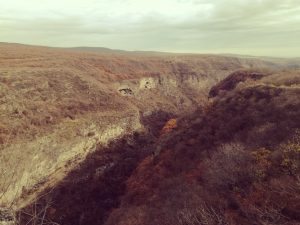 fortifications that stretched across this part of southern Georgia. As the road descends towards the ruler’s castle, it’s striking just how unruined this ruined city is – waist-high stone walls cut through for access, a corner of a medieval dwelling rising from the grass, a small rectangular church, decorated with carved crosses and ancient texts, more-or-less intact. Amid the thin, grey trunks of young ash, one can almost hear echoes of hooves on cobbles, a blacksmith’s hammer, a vendor’s cries, a priest at prayer…… This place is still alive.

Now, however, especially in winter when tourist numbers to this remote location drop, most of the life around Samshvilde is the local flora and fauna. Due to the distinct and dramatically varied habitats of almost vertical cliff faces and gushing rivers below, the canyon that cuts Samshvilde off from the surrounding planes has been designated a natural monument, and is administered as part of Algeti National Park. 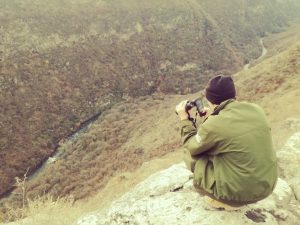 “There’s my baby!” mutters Luso Dostibegiani as she peers through binoculars across the canyon at a rocky crag. The “baby” in question is a griffon vulture perfectly camouflaged against the leafy-brown and silver cliff face. “I’ve been keeping an eye on these birds ever since I first started working here – they’re like my family.”

Watching her climb among the ruins and down the rocky paths of the canyon, it’s easy to imagine that 25 year-old Luso was born into the job, but it wasn’t always her dream to become one of only four female park rangers in Georgia. “After school I narrowed my choices down to four options;” she says, “photography, culinary training, psychology or tourism. In the end I chose psychology, because I thought it would help me re-think some of the problems I went through as a child. When I was young, my parents went to Greece to work and so I was raised by my grandparents. Even though we were well off financially, it’s still not quite the same as being raised by your own parents.”

Still, it was during her childhood in the town of Tetritskaro, 60 miles by road from the capital Tbilisi and known for its cool summertime temperatures, that Luso had her first encounters with the natural world she now works to protect. “When I was young, my grandfather worked as a herder, and he’d often go out into the forest with the cows to take them to pastures higher up. Even though it was hard work, he’d always come back looking so serene and I always wanted to have that same relaxed attitude to life. That made me want to work in tourism too, so I’d be able to spend more time in the forest, like my granddad.”

Cutting short her university education due to financial difficulties, Luso returned to her native Tetritskaro and set about trying to tackle some of the problems faced by remote rural communities in Georgia. “People leave for the big city for education or work, lots of people go abroad too because they can’t find employment here. So few of them return, and the resources they acquire – whether that be education, knowledge or financial resources – none of it comes back to the regions. This leaves the rural areas very weak, and for young people there’s absolutely nothing interesting going on, nowhere to gather, nowhere to find entertainment.” 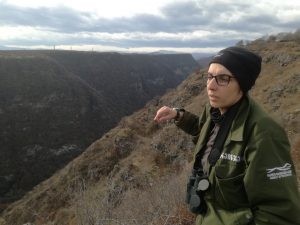 “I wanted to do something about that, so in 2016 I came back and set up the Tetritskaro Youth Center. The local municipality lent us an empty building, which we renovated with our own efforts, and we set about trying to find funding for our activities – summer schools and things like that. At the beginning some people thought we some kind of foreign agents out to corrupt local youth with liberal ideas – financed by George Soros! Once we started working, though, everyone realized how important and necessary our activities were.”

However, whilst actively engaged in running the youth center, there were other ideas taking shape in Luso’s mind. In 2015, the Caucasus Nature Fund published an article about Salome Idoidze, a ranger in Tusheti National Park, who was at that time the only female ranger in the entire country. The article sparked a flurry of media interest in this young woman and her passion for horses, photography and remote mountain trails. “I remember seeing this picture of a girl not much older than me, her horse rearing up with the mountains in the background” says Luso, “and I just thought how cool it would be if I became a ranger too!” 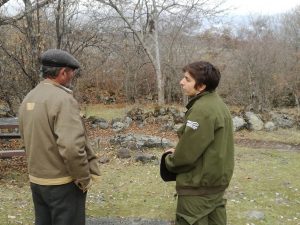 rk in some of her projects with the youth center, and vice-versa, and she was soon in active contact with park rangers and focusing more on biodiversity and the importance of protected areas. Finally, by July 2018, she was in uniform, patrolling the Samshvilde Canyon, the second female ranger that Algeti National Park has ever had. “When I started, some people joked that I’d only be around for a few months before I went off to get married” she says. “I went along with the jokes too but it did stay with me. Some local people also asked whether being a ranger was an appropriate job for a girl, but I realized that you simply have to prove to them that you can do it. You have to show them that it’s not physically hard walking up and down these paths, and that you’re not afraid to stop a poacher or someone illegally fishing or cutting firewood. When you prove yourself, people come to respect you.” 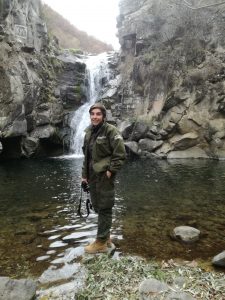 Having seen Luso skip almost effortlessly down the difficult descent from the ruins of Samshvilde to a beautiful waterfall in the canyon below – the strain of which has left me almost breathless and quite dizzy – I hesitate to ask her any further questions about the potential difficulties of being a female ranger in a male-dominated system. I decided to ask her instead if she thinks anything is changing for future generations of girls who might want to get involved:

“Change starts with you” she says, after a moment’s thought. I nod, secretly prepared to dismiss this assertion as a piece of second-hand popular psychology culled from some online motivational meme. But it’s clearly something Luso has thought long and hard about. “Like I told you, there were times when it was hard for me to do this job, and there were times when people didn’t take me seriously. I honestly thought once or twice about leaving the job, but then I thought about all those girls growing up in villages nearby who see me doing this job and how important it is for them to have this example from a young age – a young, ambitious woman communicating with elder males as an equal. It’s much more than just wearing the uniform. After that, I decided to stay at it and I haven’t regretted that decision for a moment!”

She might need binoculars to catch sight of griffon vultures on a far cliff side, but it’s clear that Luso Dostibegiani needs no help whatsoever in seeing what makes people tick, and in a protected areas system that relies as much on communication with local communities as it does on donor support and central planning, the work and vision of people like Luso are absolutely invaluable.

News from June 2020: watch a video with Luso guiding you through Algeti National Park here. 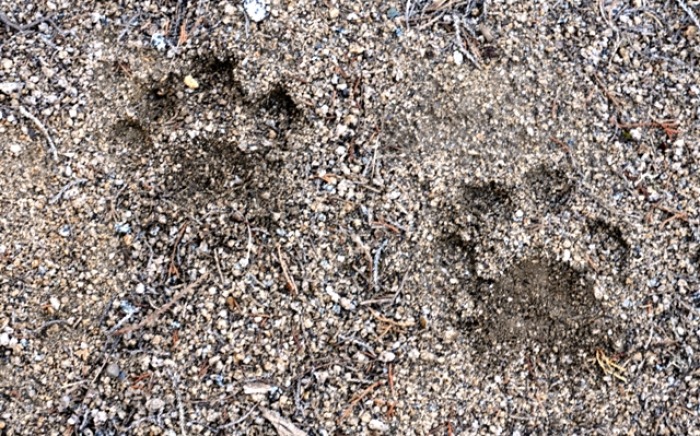 November 9, 2012
-
Biodiversity, In The Field
Recent Caucasian leopard tracks in Armenia give new hope to conservationists working in the Caucasus. Villagers in the Shvanidzor and Syunik province as well as borders guards along the Armenian-Iranian border…
Read More →
Posted by CNF Staff
1 MIN READ 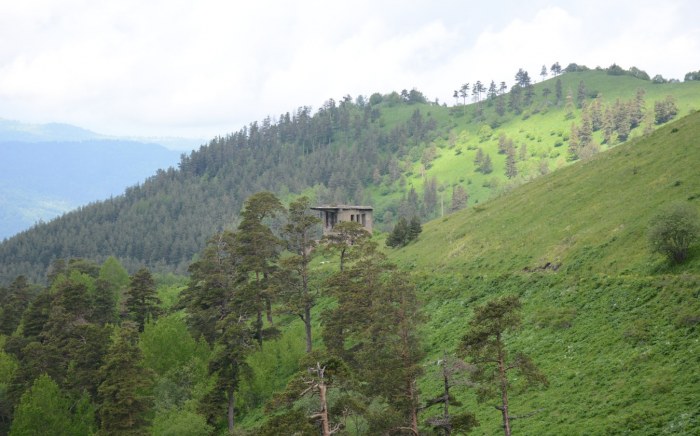 October 6, 2020
-
CNF News, In The Field, South Caucasus Parks, Tourism
In Borjomi-Kharagauli National Park’s Nedzvi Reserve, a hiking trail and camping infrastructure are currently being built and are expected to be completed in November. The work consists of…
Read More →
Posted by CNF Staff
1 MIN READ 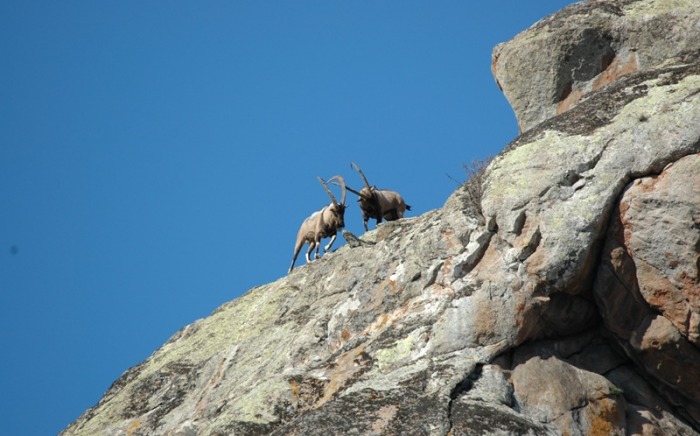 July 23, 2014
-
Biodiversity, Director's Desk, In The Field
Because Armenia’s Khosrov Forest is only an hour or so from Yerevan, I have been there at least a dozen times over the last six years, and last…
Read More →
Posted by CNF Staff
2 MIN READ
STAY CONNECTED