One Thing Leads to Another… 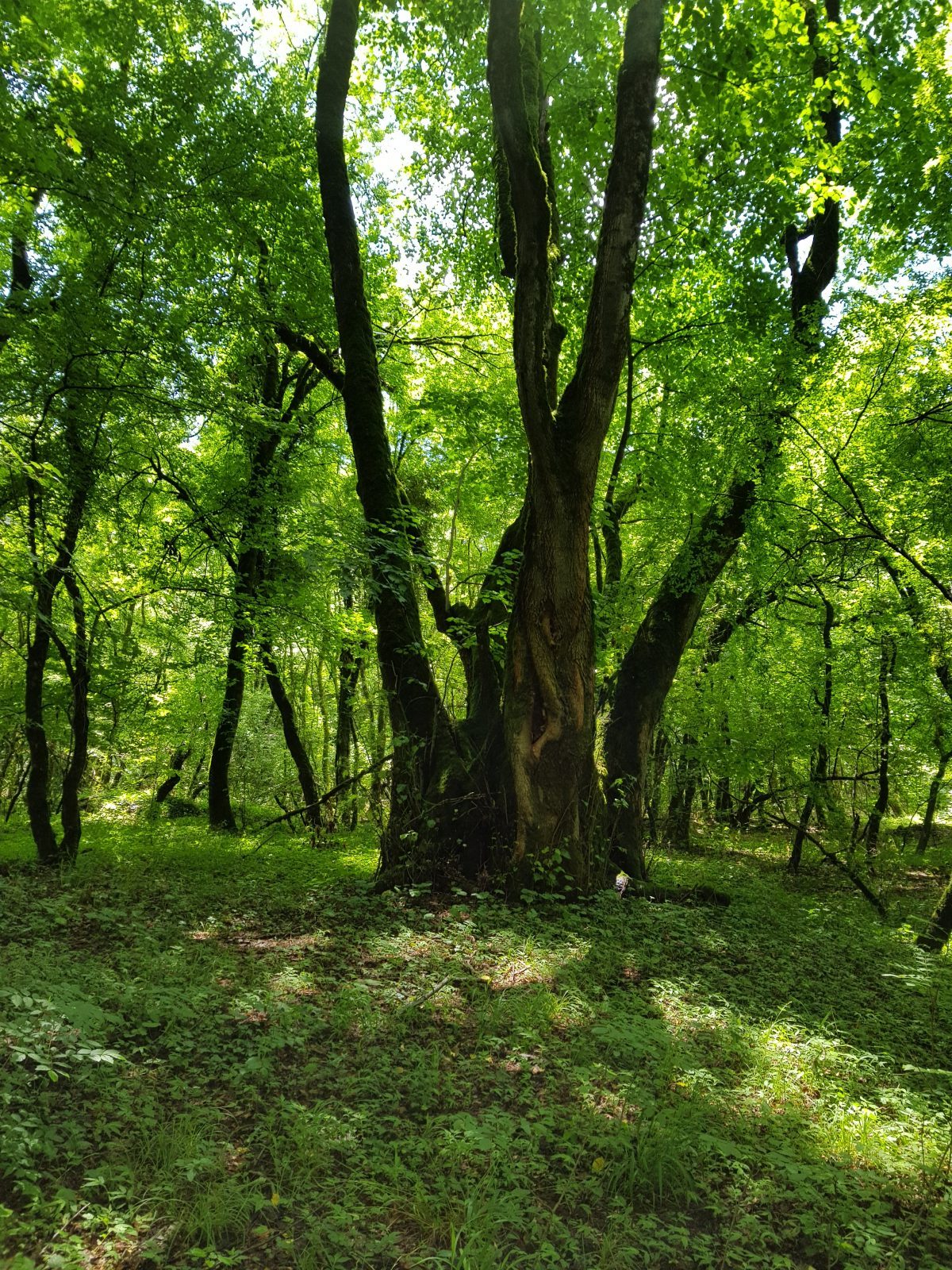 This blog post was written by David Morrison, former Executive Director of Caucasus Nature Fund, now Chair of CNF’s Board of Directors

When I started CNF in 2008 I had no idea I would stay for over eight years or that, with Geof having now taken over as CNF’s Executive Director, I would take on a new role as board chair.

I also had no idea how broad our network, both in the Caucasus and around the world, would become—and how much that network in turn would support our efforts to save the unique nature of the region.  My work at CNF led to my becoming a board member at the Bank of Georgia in 2010, and I subsequently joined the board of the Georgia Healthcare Group in 2015. In turn, both have joined our CNF network and become strong supporters of Georgian nature.

As CNF board chair my main job is working with our supporters, and it was most gratifying in June to lead a contingent from Georgia Healthcare Group on a two-days hiking trip to Lagodekhi Protected Areas.  I wanted  them to see first-hand where and how their money was being invested.

Six GHG board members and staff set off with our guide Dato, who communicated in a combination of translated Georgian (through our healthcare group board coordinator Tea) and German (through me). Dato has worked in Lagodekhi for 4 years and was delighted to be guiding a group that is supporting his park and his livelihood. 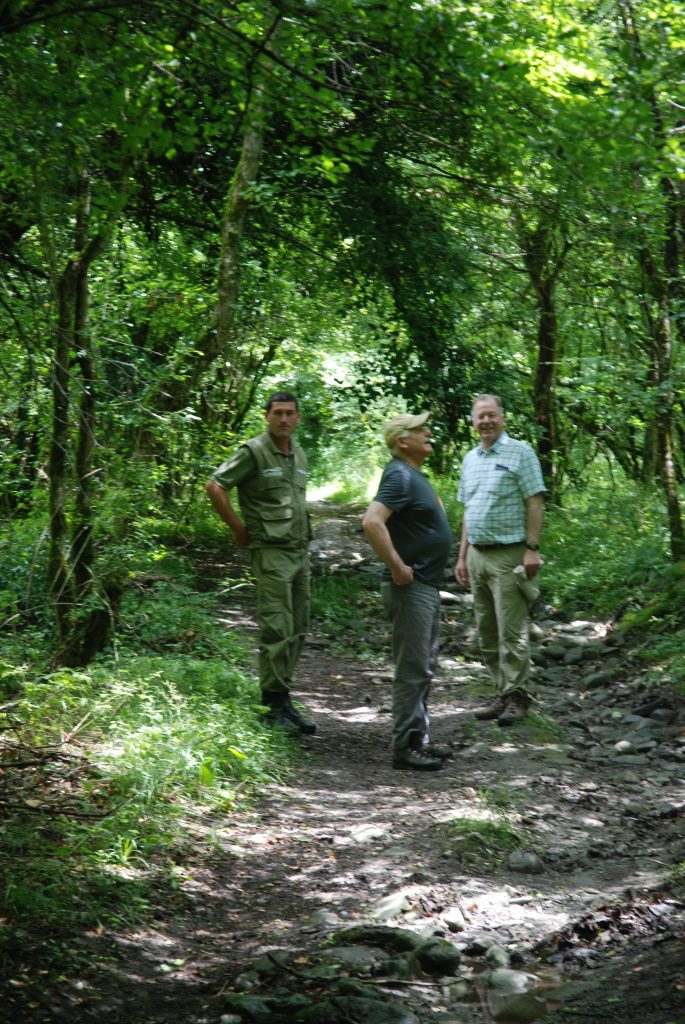 Dato, Mike and me starting off

Our goal on the first day was to reach the ruins of Machi, a fortress perched on the edge of a river gorge on the border between Georgia and Azerbaijan. Not long into this hike along the lower slopes of the greater Caucasus range, we found ourselves in an unusual naturally-formed single-species forest, in this case consisting of mostly young and spindly oriental hornbeams. 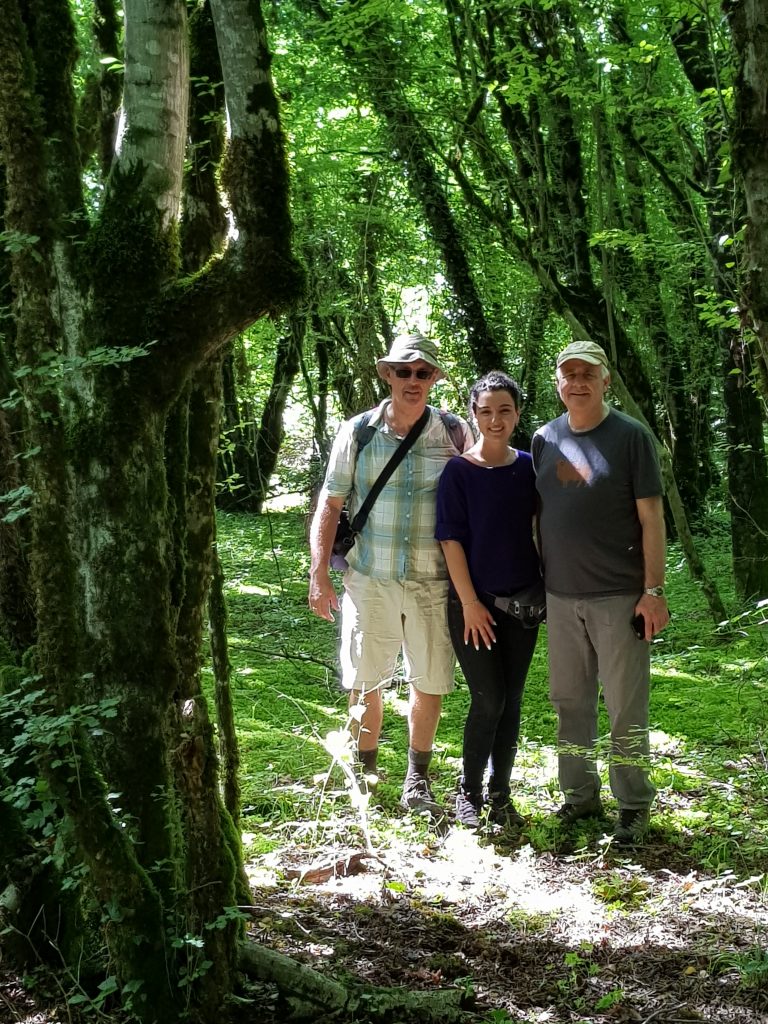 More than 50 years ago a hurricane-force wind storm devastated this portion of Lagodekhi’s ancient beech and oak forest. The hornbeam stand is one of nature’s early steps in the several hundred-year process of healing itself. Eventually the original forest cover will return, but in the meantime the landscape has an eerie beauty.

The mono-forest gave way to a thicker, taller mixed forest of beech, oak and elm as we ascended, then plunged down into a river gorge. When we climbed up the other side, there were the ruins of the Machi fortress on a promontory, vertical drops on all sides. 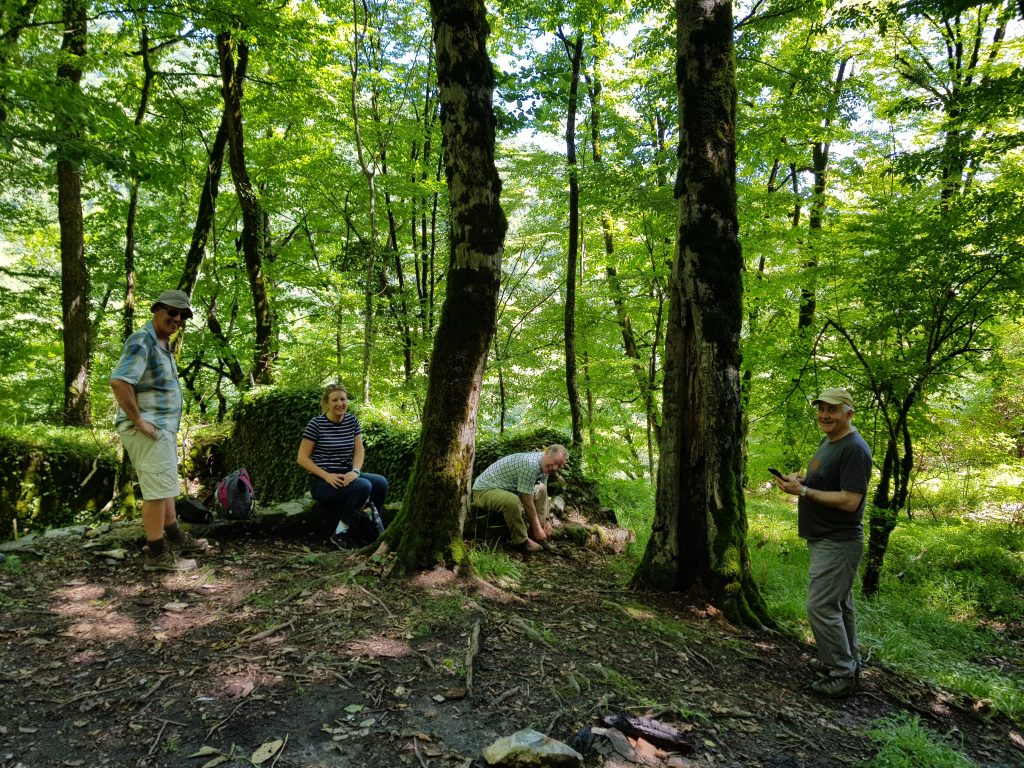 Arrival at Machi-Tim, Rebecca, me and Mike

Georgia’s history is punctuated by invasions and many such fortresses were constructed to protect the territory. This outpost would have been the base to about 5000 soldiers, before it was sacked and destroyed by the Persians in the 17th century. Only a small church survives today, but the now vine-covered rubble indicates it must once have been an imposing structure with a view over what is today Azerbaijan. 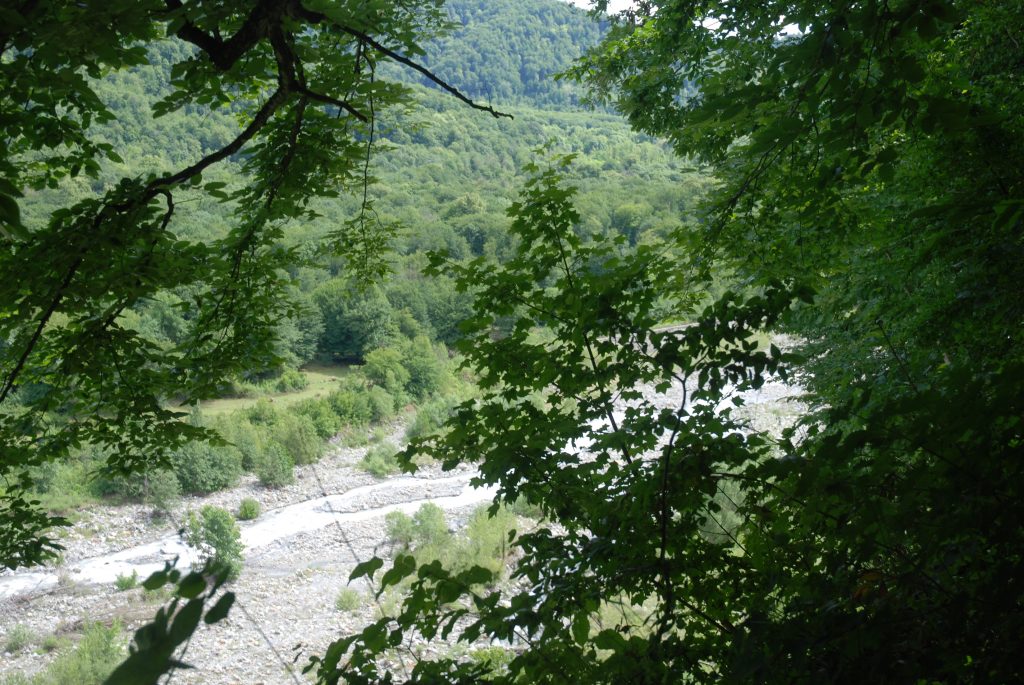 Azerbaijan across the gorge

If our destination the first day was a man-made site, our goal on the second is a wonder of nature: the Great Waterfall. For most of this hike, which takes place in the deep river bed at the bottom of a steep gorge, we clambered over boulders that have washed down the mountain in torrential spring thaws.

There were numerous crossings, sometimes over easily negotiated stepping stones, but often on treacherously slippery logs.  Thanks to Dato we managed these with only one fall into the rushing river that fortunately bruised nothing but Tim’s ego. 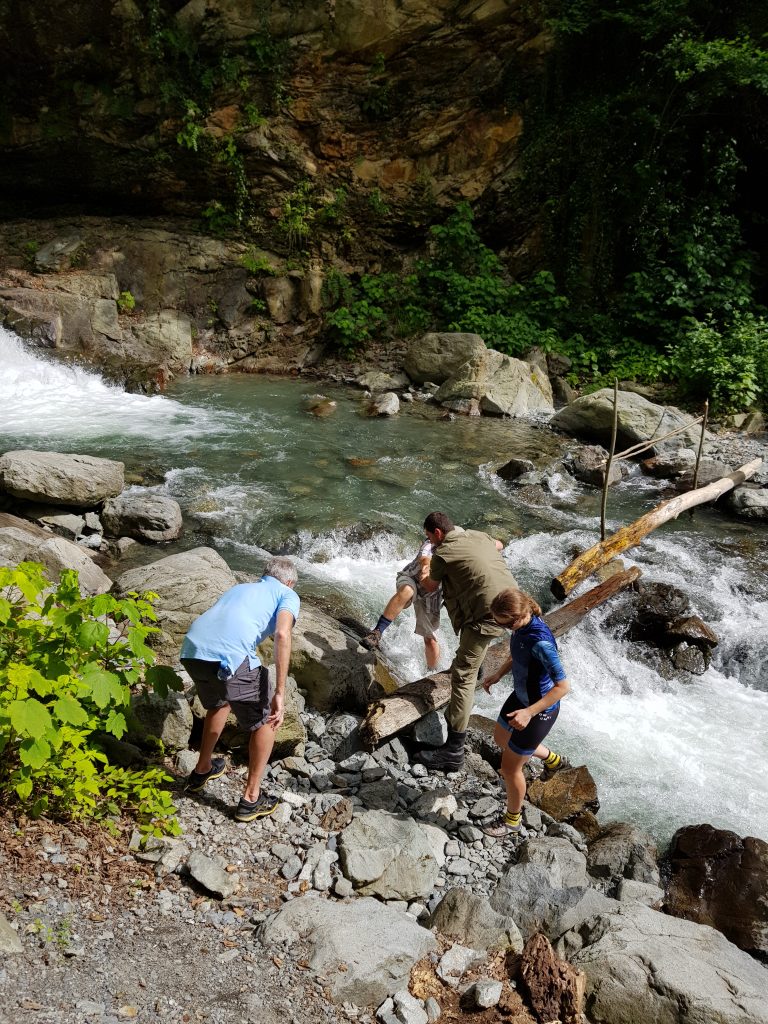 There was a steep climb at the end. 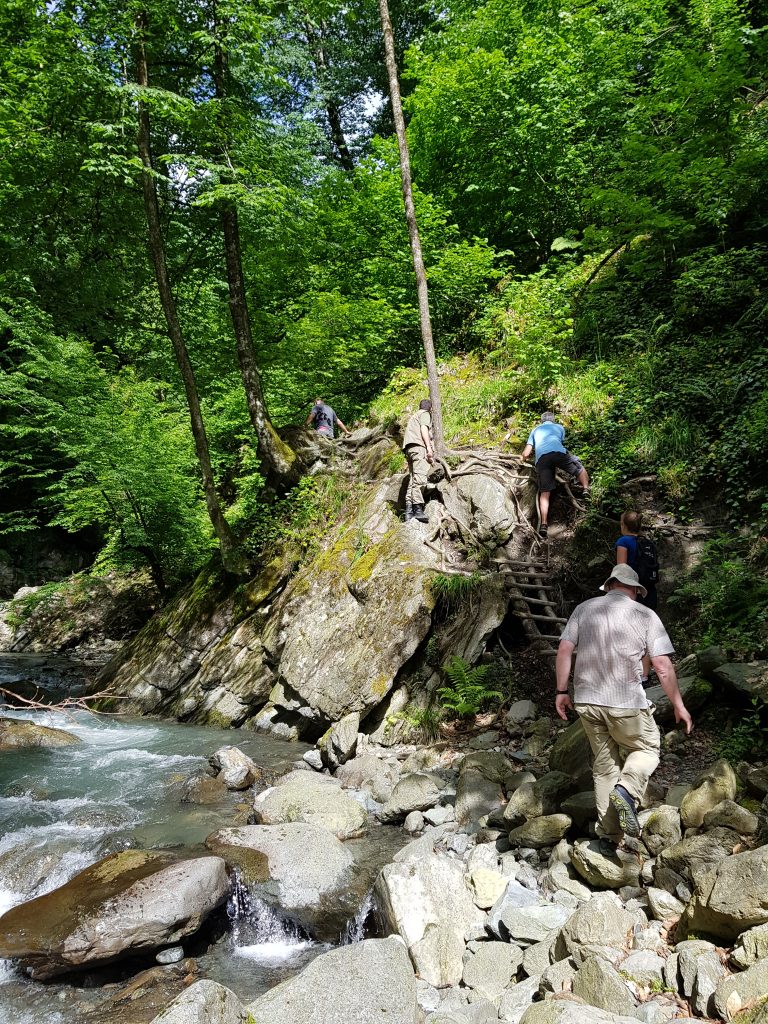 Dato in the middle, Mike ahead, Paul, Rebecca and me below

But it was well worth the effort. There before us was the Great Waterfall, 40 meters of cascading, magnificent, mesmerizing and refreshing water. 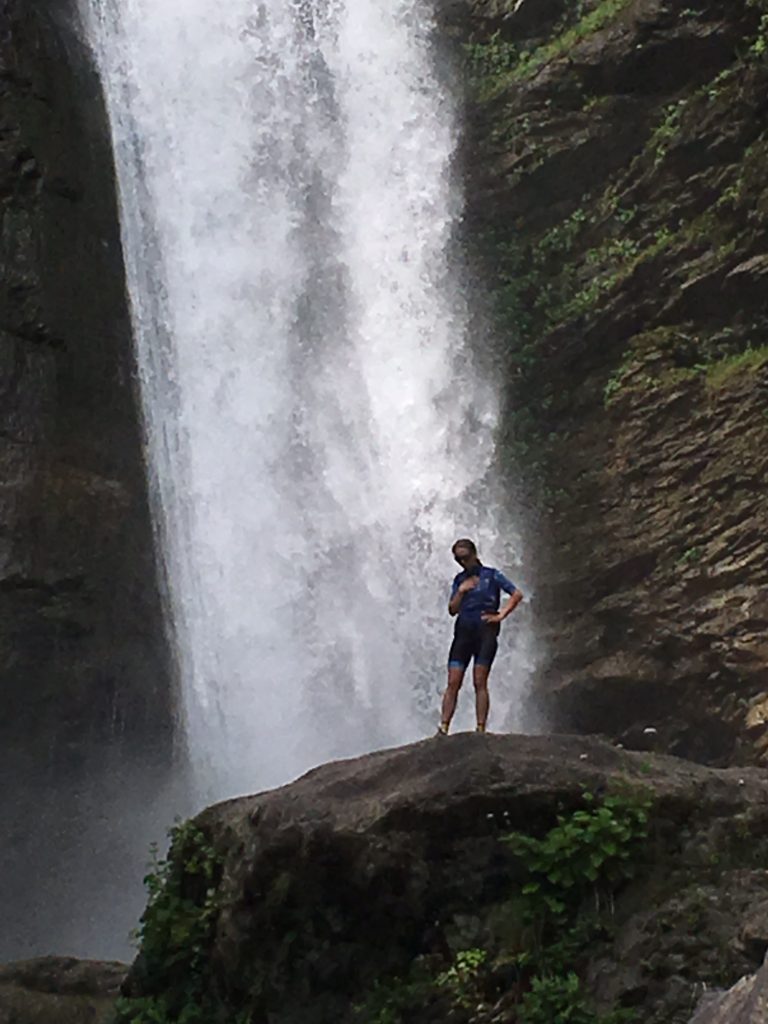 Ingeborg and the Great Waterfall 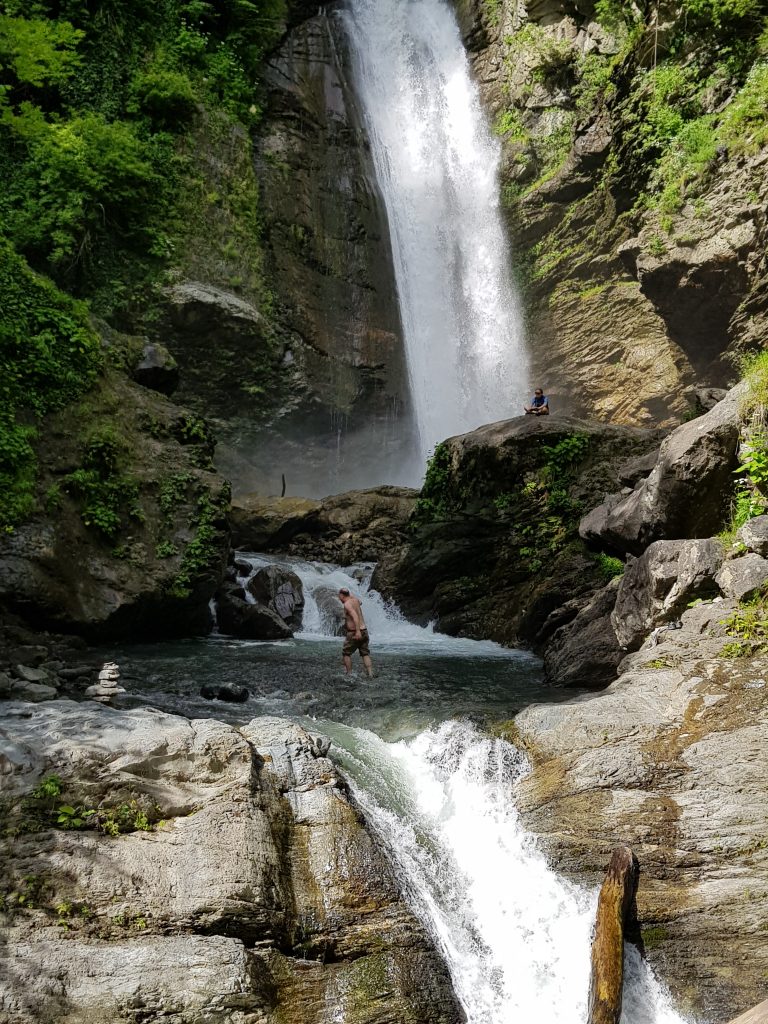 We ended with—what else—a Georgian feast, put on by Dato and his colleagues. The setting was magnificent, the barbecue delicious and the toasts warm and convivial. 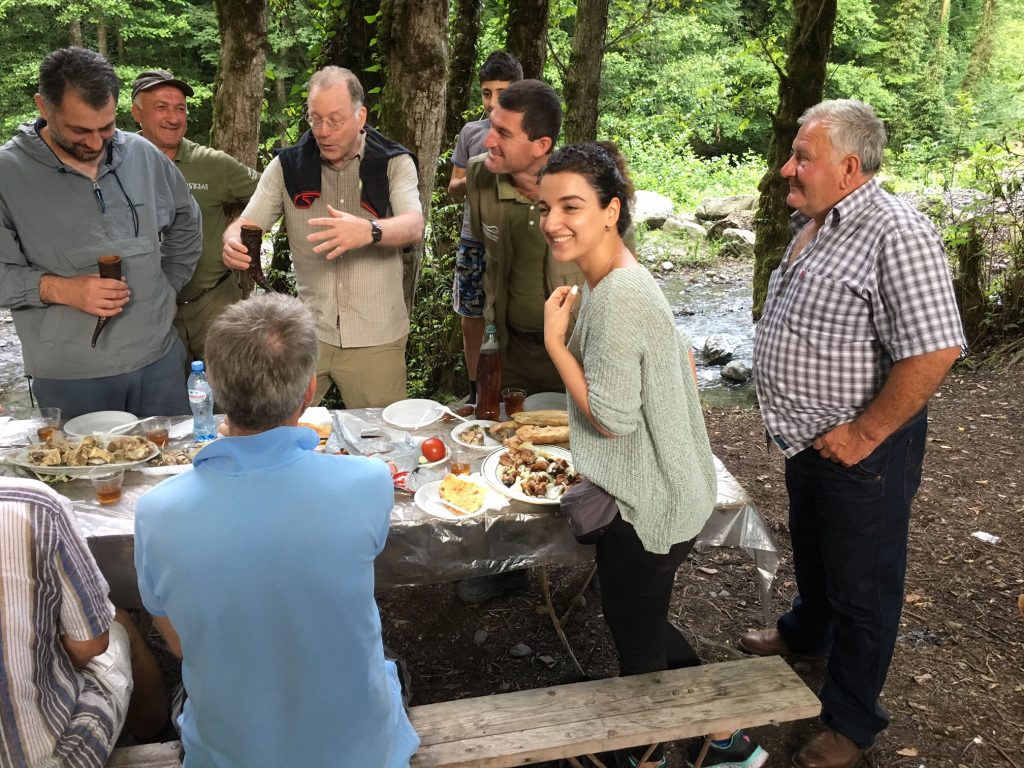 Paul, Tea Dato and me with our Hosts

What our group witnessed first-hand was the diversity of the forest—the abundant ferns near the waterfall, the healthy moss on the shady side of the tree trunks, collecting water and providing nutrients, and lichens on the fallen trees left, as they must be in a national park, to decompose naturally providing a habitat for a myriad of creatures that are all signs of a healthy forest ecosystem. 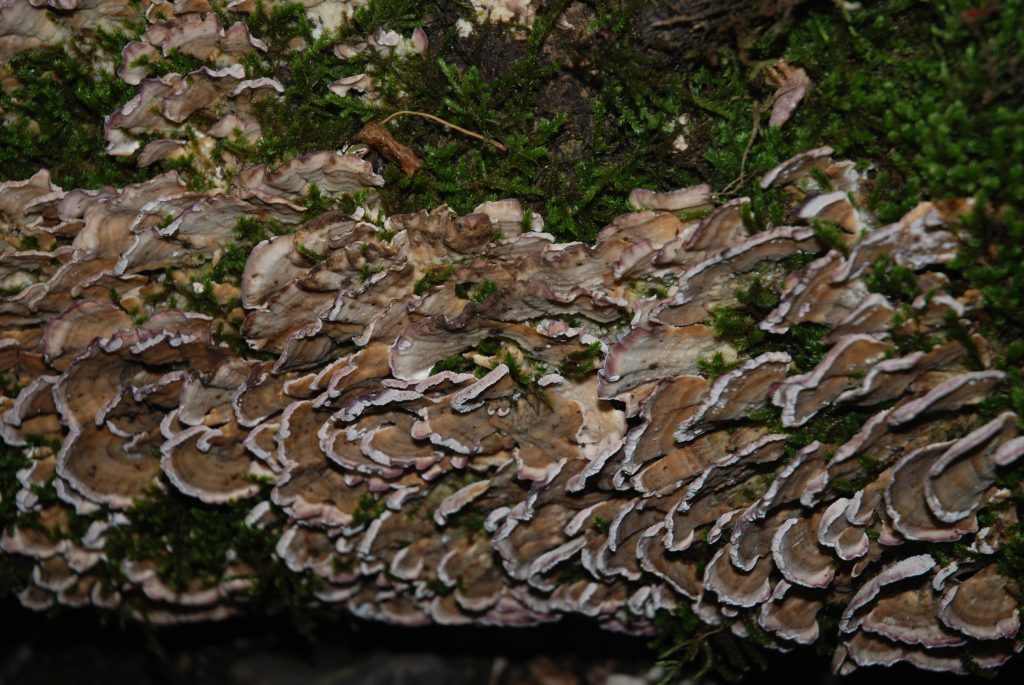 That healthy ecosystem feeds the fertile valley that is one of Georgia’s most productive, home to the main wine and fruit producing region of the country.  So the forest nourishes the region which in turn feeds the people.  Georgia Healthcare Group is revolutionizing healthcare in Georgia—and its generous donation is being put to good use by CNF in its ongoing effort to sustain healthy national parks and make a difference to the lives of those who work to protect them.

The link between nature and human health here is unmistakable—one thing leads to another. 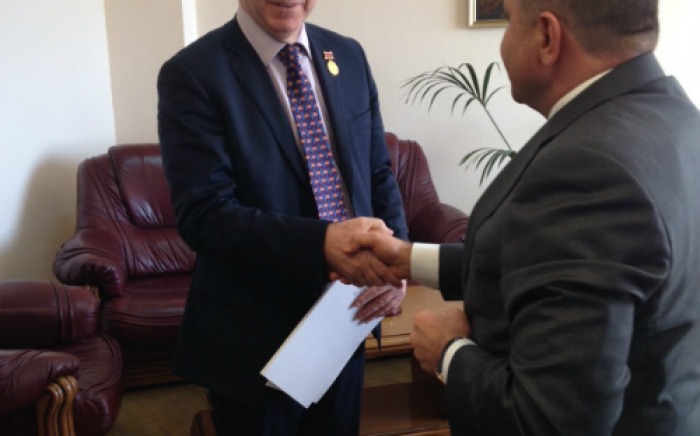 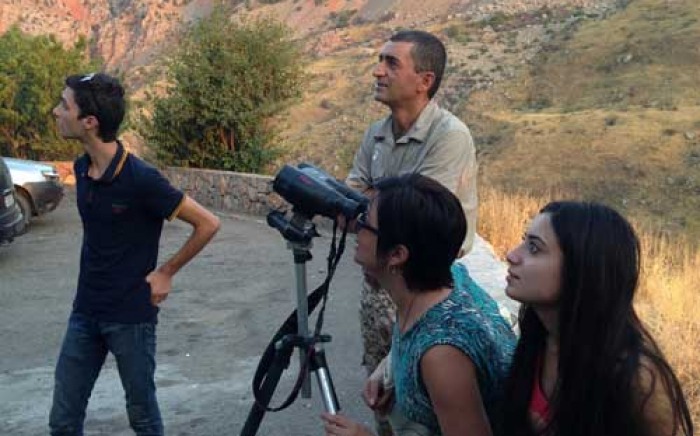 January 18, 2016
-
South Caucasus Parks, Tourism
In the South Caucasus, as in many places around the world, it’s taken as a given that governments should be directly involved in managing protected areas and landscapes.…
Read More →
Posted by CNF Staff
4 MIN READ
STAY CONNECTED